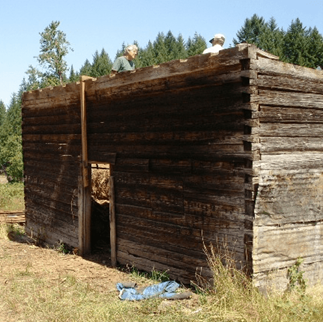 We are excited to announce that the reconstruction of the Molalla Log House at Hopkins Demonstration Forest which will be completed in 2022, with grant funds primarily from the Kinsman Foundation. Other major contributors are the Clackamas County Cultural Coalition and the National Trust for Historic Preservation. After the log house was dismantled in 2007, the logs were stored in warehouses and rehabilitated. At the same time the preservation team searched for a site for long term placement, stewardship and educational interpretation. In 2017 the Board of Forests Forever, Inc. agreed to provide the Molalla Log House a new home.

Hopkins is the perfect location for this rare historic log building, made with Oregon’s indigenous Douglas fir, where it will be open to the public and a part of the overall educational programming for visitors and students. Here it will be interpreted for its expert wood craftsmanship and historic association.

All rehabilitation work has been done carefully by experts in woodcraft to ensure that the logs and design of the building retain its historic integrity and that it is preserved to the greatest possible extent. The building is sited near the wildlife ponds at Hopkins and it presents a fitting historic landscape for this unique and highly crafted log building.

The Molalla Log House may be the oldest building in Oregon, if not the entire Pacific Northwest. It was made of Douglas fir, without the use of nails, and was possibly felled in the forest and hewn by axe by fur hunters and trappers who migrated from Canada over the Rocky Mountains in the late 1790s. The craftsmanship indicates that the original creators were expert builders who had learned their craft from centuries old techniques. The logs were hewn square and stacked horizontally to create a tight fitting 1 ½ story, 18’ by 25’ log building. Prior to dismantling the log building for preservation and rehabilitation in 2007, the beautiful half-dovetail notching held the corners of the building together securely for over 200 years in the Molalla region of the foothills of the Cascades.

Even after many years of careful study of the building and its possible history, the origins of the Molalla Log House remain a mystery. The original builders did not write in journals or document the building or their early stay in the wilderness of the Oregon Territory. What they did leave is evidence of their brief occupation – an example of expert woodcraft and a fortified log building that stood on the landscape for two centuries – which was probably later used by French Canadian Freemen fur hunters, early American pioneer farmers and later 20th century owners.